With the launch of the new Unitary Patent System (Unified Patent Court, Unitary Patents), the most significant change is taking place in the patent market since the 1970s. Setterwalls is extremely well positioned in the new patent environment. In addition to being a long-standing Sweden–leader on patent litigation, we possess unique experiences from the negotiations of the legal instruments, the system’s European and national implementation (legislation) as well as the European level operationalisation. Setterwalls’ patent team stands ready to advise and assist you on strategic matters and in disputes.

The information is updated regularly and the latest updates and summaries on UP, UPC can be found here. You can also follow us on Linkedin for this and other news from Setterwalls.

The Unitary Patent System (UP, UPC) in summary
The unitary patent system consists of European patents with unitary effect (Unitary Patents, UP) and the Unified Patent Court (UPC), both with pan-European reach. Unitary effect means the legal effect as well as any limitation, transfer, revocation or lapse of the UP apply equally in respect of all participating countries. A holder of a European patent will be able to obtain unitary effect by a simple request at the European Patent Office (EPO) within one month from publication of the mention of the patent grant. Renewal fees for Unitary Patents are set to correspond to the combined national renewal fees in Germany, France, the United Kingdom and the Netherlands; ‘TOP 4’ thus becomes the price for aggregate patent protection in up to 25 countries. The UPC will be exclusively competent to settle disputes relating to Unitary Patents, and thereupon based Supplementary Protection Certificates (SPCs). After a transitional period the exclusivity covers also validated European patents, and thereupon based SPCs. Before the UPC, a patent proprietor might obtain e.g. permanent injunctions with pan-European effect. Correspondingly, a competitor might have an unfounded patent revoked in respect of all participating countries at once. The UPC procedure is strikingly set to be effective, with the final oral hearing normally taking place within one year. The court fees are in line with the level of fees in Germany today. At the outset, both Unitary Patents and the UPC appear as alternatives to the current patent system, i.e. as attractive parts of a reinforced European smorgasbord. Over time, the UPC will take over completely the jurisdiction relating to European patents.

Geographical Scope
UPC will be a court in two instances. The Court of First Instance (CFI) has a central division with its seat in Paris and sections in London and Munich.  Further, the CFI comprises local and regional divisions as voluntarily set up by participating countries. Notably, Sweden and the Baltic States share a regional division seated in Stockholm. The Court of Appeal is located in Luxembourg and responsible for ensuring consistency of case law. Each panel of the Court sits in a multinational composition. The Court organisation comprises other bodies such as the Registry, the UPC Training Centre, and the Patent Mediation and Arbitration Centre.

Extension of the unitary effect of a Unitary Patent to a given country presupposes not only that said country participates in the enhanced cooperation on unitary patent protection (thus being bound by EU’s patent regulations) but also that the country has ratified the UPC Agreement (UPCA).

Furthermore, the locations are indicated of divisions (orange, red, green dots), incl. the regional division in Stockholm and other UPC bodies (white, yellow dots) which are fixed to date.

The UK will not participate in the unitary patent system. UK did ratify the UPCA in April 2018, but officially withdrew its ratification in July 2020. 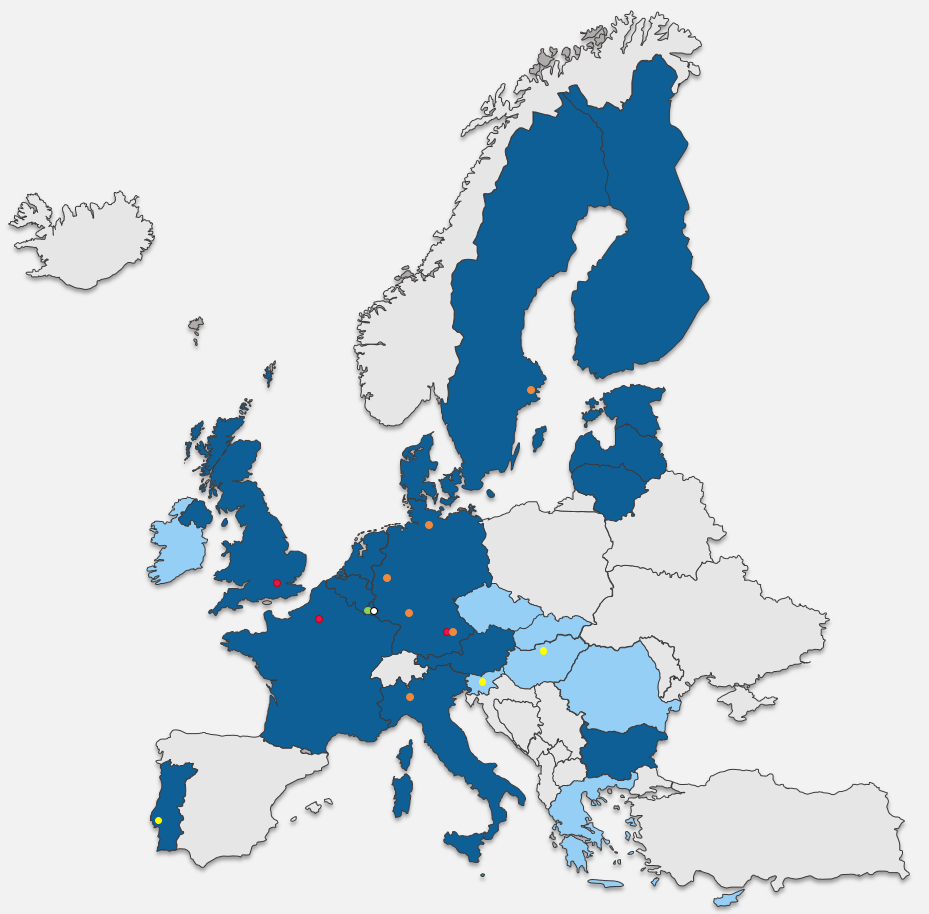 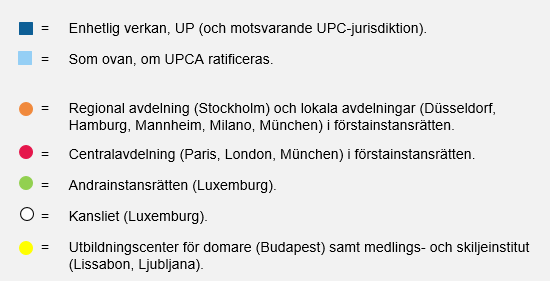 Launch and Timeline
The EU’s patent regulations have entered into force but their ap-plicability require the entry into force also of the UPC Agreement (UPCA). To date, 16 countries have ratified the UPCA. Hence, the system’s geographical scope will be broad at once, and expected to grow over time (‘Geographical Scope’ above). When Germany rati-fies the UPCA, the system as a whole will apply 3–4 months later on a given date (Art. 89.1 UPCA). To ensure the Court’s readiness on that day, final preparations will take place during a provisional UP-CA application, as regulated by a Protocol (PPA). So far, twelve countries have acceded the PPA. When one more country has ac-ceded, provisional application starts (Art. 3 PPA). About 8 months of provisional application are expected for completion of the prepara-tions. Austria has signed the PPA with intention to ratify it. Germany is expected to ratify the UPCA once it is clear, from the preparations during the provisional application, that the UPC will be operational on the day of UPCA entry into force.. Given the system launches, which we strongly believe will happen, opt outs (Art. 83 UPCA, ‘Stra-tegic Choices’ below) will be offered, likely starting from around the time of Germany’s UPCA ratification thus roughly halfway through provisional application. The new patent system may thus become applicable on quite a short notice. Patent market players and stake-holders should prepare. Setterwalls stands ready to assist.

Strategic Choices
Patent market players and stakeholders will stand at distinct strate-gic crossroads in the new European patent environment. Innovators will face the familiar yet vitalized choice of patenting route: national patent or European patent. If the pick is a European patent, choice is then between unitary effect and national validation. During a tran-sitional period, certain exceptions are available from the UPC’s ju-risdiction relating to European patents; then a holder of a European patent application, a European patent without unitary effect, or an SPC based thereupon, may opt out from the UPC jurisdiction (and later possibly opt back in). Moreover, in that period a right holder or a competitor may before national courts bring an infringement action or a revocation/invalidity action as regards a European patent with-out unitary effect, or an SPC based thereupon. The UPC procedure involves certain freedom of choice concerning where (what division) and in what language the procedure is conducted, and so forth. Set-terwalls stands ready to assist and represent clients on strategic matters and on disputes including litigation.

The latest updates on UP/UPC

20 Januray 2022: UP/UPC Update: The UPC Agreement may enter into force already in the autumn of 2022

14 July 2021: Preliminary injunctions against the German UPCA ratification bill rejected – one step closer to the UPC

18 September 2020: UP/UPC Update: The UPC Preparatory Committee signals a functional UPC in a near future

18 March 2020: UP/UPC Update: The German Federal Constitutional Court’s decision on the UPC to be published on Friday

10 March 2020: UP/UPC Update: UK’s step to leave the UPC is regretted in the House of Lords

21 November 2019: UP/UPC Update: Signal that UPC complaint will be decided early next year

24 May 2019: UP/UPC Update: Premises of the Paris seat of the Court of First Instance are displayed